How do the new ITV local news regions compare with the BBC?

I thought it might be interesting to look at the differences in the provision of local news on BBC1 and ITV (or UTV or STV) once ITV plc implements the local news changes.

In the following regions, the BBC and ITV services have the same geographical coverage and the services are a full half-hour of regional news weekday evenings. The percentages in brackets are the proportion of the total UK population served. 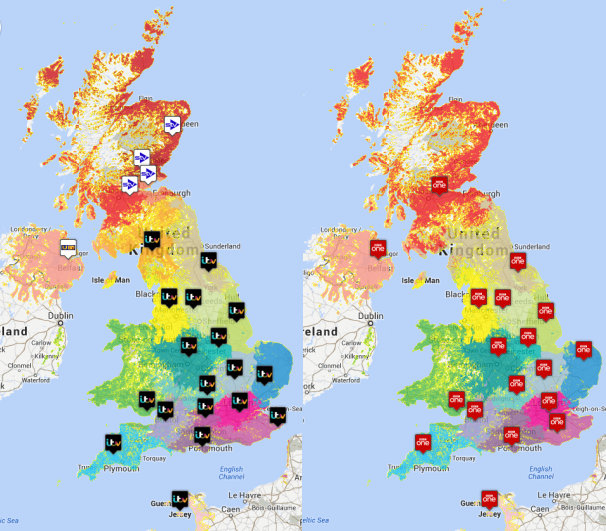 In the following regions, the BBC and ITV services have the same geographical coverage and the services are a full half-hour of regional news weekday evenings on BBC One, but just 20 minutes on ITV.

ITV will be more local than the BBC

The Anglia region is served by a 30 minute programme on the BBC, which has about 10 minutes of opt-out for the Cambridge side of the region. ITV will be providing 20 minutes of dedicated news for both Anglia East and Anglia West.

ITV Tyne Tees will have 20 minutes of local news, as will Border. The BBC will provide 30 minutes of news covering both the east and west. 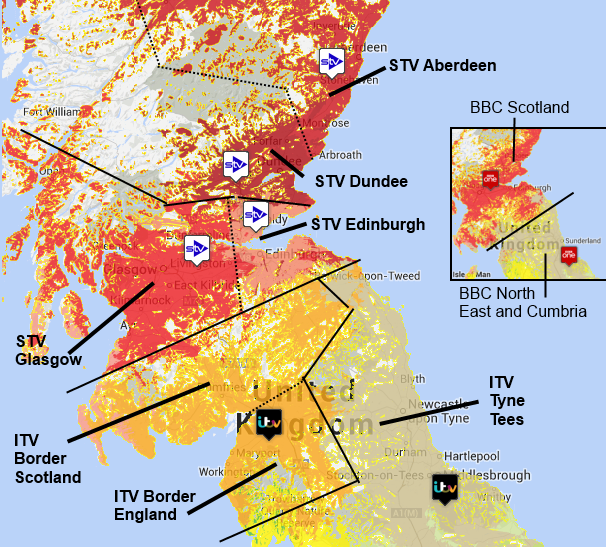 The nation of Scotland is covered by a single BBC region (in HD), but gets coverage from five regions on channel 3:

Ofcom "have also decided that the licence for Border should require separate DTT transmissions for the English and Scottish areas. It will be a matter for ITV if it decides to provide split satellite transmissions â€“ these are not provided under PSB licences. "

The only part of England where there is significant difference in the provision of news services between ITV and the BBC is in the South East of England. 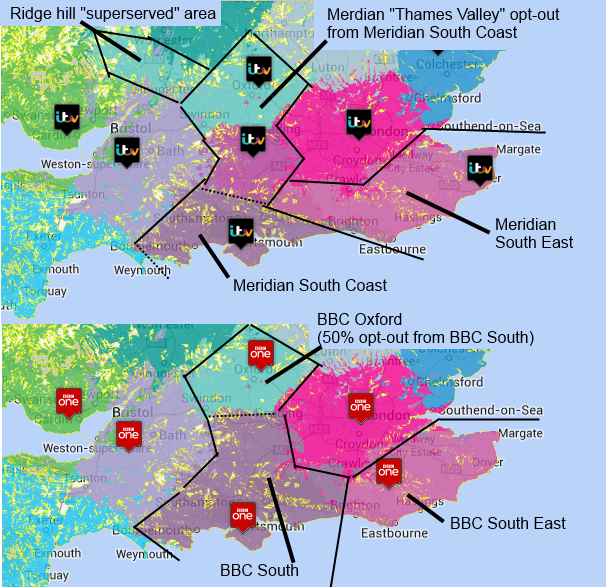 However, Meridian South East is not the same area as BBC South East. It doesn't include the Brighton and Hove conurbation, and it does include much of West Sussex (served by the Midhurst transmitter region) which is in the BBC Southampton area.

The Hannington transmitter area - the M3/M4 corridor area also known as the Thames Valley, joins with Oxfordshire on ITV to form a TWO MINUTE opt-out from an ITV programme that covers the same as BBC Southampton (minus Brighton and Midhurst).

So, in Oxfordshire you get 15 minutes from the BBC and 2 minutes covering a larger area from ITV. It is notable that the current situation, where the Oxford transmitter doesn't provide a full opt-out is actually breaking the licence condition.

For historical reasons, if you are served directly by the Ridge Hill transmitter, you have an extra ITV broadcast to you. You don't just get ITV Central West, but also ITV West Country East. No such choice is provided by the BBC on Freeview.

It is probably worth remembering in the UK, most of the population lives in the urban areas, with rural areas having very low population density. This diagram shows the relative population sizes of the BBC nations and regions:

Help with TV/radio stations?
[][][
In this section
Comments
D
Donald MacLeod
8:57 PM
I am confused
I watch STV on freeview 103 and I get news from Glasgow but if I tune to 003 I get news from Aberdeen
Why is this as I thought 103 was just the same except in HD but?

StevensOnln1's 3,432 posts
D
Douglas Burgneay
2:03 PM
Following the retune I cannot get BBclondon SE from BluebellHill. Is there any way I can?

Douglas Burgneay's 1 post
S
StevensOnln1
sentiment_very_satisfiedPlatinum
3:02 PM
Douglas Burgneay: Bluebell Hill broadcasts BBC South East regional news. You must have been picking up London region from another transmitter. Please provide a full postcode so that we can see which transmitters are available at your postcode, where you are in relation to them and your predicted coverage etc.


Thanks Mike I will ask Arqiva. I suspect it was a cost cutting exercise by the BBC then!.
Pete T.

Peter Trayte's 5 posts
S
StevensOnln1
sentiment_very_satisfiedPlatinum
12:24 PM
Peter Trayte: Crystal Palace has only ever broadcast BBC and ITV London news. You must have been picking up BBC South from another transmitter.