If you want to watch TV on a mobile phone or just inside somewhere this could become a reality as soon as April 2007. In fact, a new DVB-H television service was demonstrated working today in London.

(DVB-H is the Handheld version of the Digital Video Broadcasting standard which is used by Freeview (DVB-T), Sky (DVB-S) and NTL (DVB-CS)). 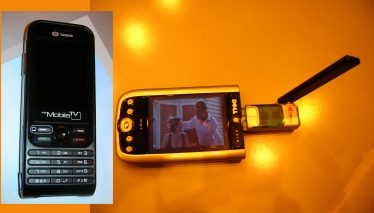 Shown here on two prototype devices (a mobile phone and a conventional PDA with a plug-in card), I was watching ITV-1 live. The picture quality is excellent despite being at only 320x240 screen pixels and the sound is the usual CD quality that you expect from digital television. 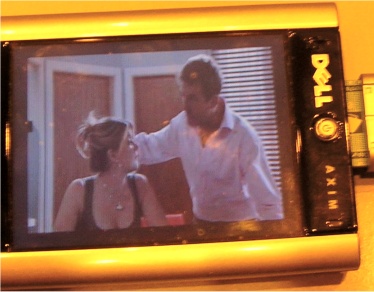 By clearing out a few old fashioned communications links that were using the radio frequencies in the range 1452MHz to 1479.5MHz, the regulator Ofcom will sell off these (so called L-band) frequencies as 16 blocks of 1.7MHz. Some of these can be used for DAB digital radio (and also the TV services delivered this way).

National Grid Wireless (the privatized BBC engineering division) hope to put three of these blocks together to roll out nationwide a subscription television service that can be received indoors and outdoors - wherever you want to watch TV.

DVB-H has many advantages over using the digital radio system (DAB) for mobile TV, not least a substantial increase in battery life.

By using MPEG-4 technology, each TV channel will just require 350kb/s. The 5.1Mhz band if used for DVB-T will provide a quite reasonable 6.34Mb/s or around 18 simultaneous TV channels.

Sadly, as the network will be funded by mobile phone company subscriptions the BBC channels will not be carried by this service - the Broadcasting act forbids companies making a charge for public service channels. This may also prevent ITV-1 and Channel 4 and five from being on the launched service.

National Grid Wireless have already proven that they can deliver such a system as they have created a 2000 DVB-H transmitter network that is working in the USA.

A pocket device with just 2GB of Flash memory would be able to record over 13 hours of programs.


Help with Television sets?
[][][
In this section
CommentsYour comment please